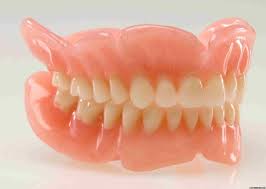 Complete denture an appliance replacing all the teeth of one jaw, as well as associated structures of the jaw.

Patients can become entirely edentulous (without teeth) for many reasons, the most prevalent being removal because of dental disease typically relating to oral flora control, i.e., periodontal disease and tooth decay. Other reasons include tooth developmental defects caused by severe malnutrition, genetic defects such as dentinogenesis imperfect a trauma, or drug use.

Complete dentures are worn by patients who are missing all of the teeth in a single arch (i.e., the maxillary (upper) or mandibular (lower) arch) or, more commonly, in both arches, upper/maxillary and lower/mandibular alike.

Dentures can help patients through:
• Mastication or chewing ability is improved by replacing edentulous areas with denture teeth.
• Aesthetics, because the presence of teeth gives a natural appearance to the face, and wearing a denture to replace missing teeth provides support for the lips and cheeks and corrects the collapsed appearance that results from the loss of teeth.
• Pronunciation, because replacing missing teeth, especially the anteriors, enables patients to speak better. There is especially improvement in pronouncing words containing sibilants or fricatives.
• Self-esteem, because improved looks and speech boost confidence in the ability to interact socially. 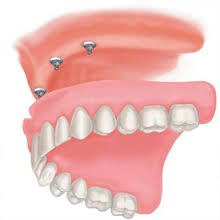 An implant-supported denture is a type of overdenture that is supported by and attached to implants. A regular denture rests on the gums, and is not supported by implants.

You should remove an implant-supported denture daily to clean the denture and gum area. Just as with regular dentures, you should not sleep with the implant-supported dentures at night. Some people prefer to have fixed (permanent) crown and bridgework in their mouths that can’t be removed. We will consider your particular needs and preferences when suggesting fixed or removable options.